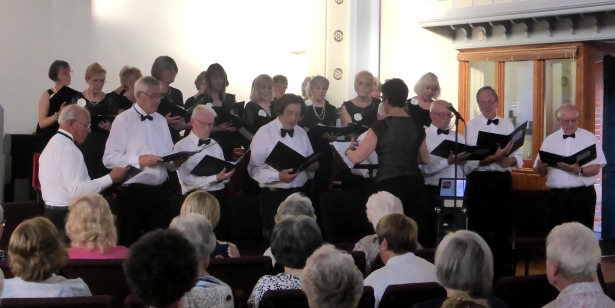 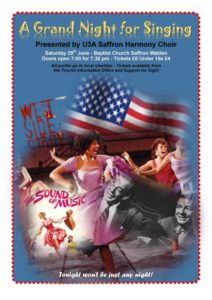 Profits from this year’s summer Saffron  Harmony  Concert on 29th June 2019 were £678-93 and will be divided between :- Support 4 Sight and League of Friends’ Radwinter Road Hospital.

The Ukulele Group delighted us with three sing-along songs.

The Concert raised £873-27 for charity, to be divided between East Anglia Air Ambulance and Saffron Walden Opportunity Playgroup.

Thank you all for your help and support.

Thanks to Paul Crawford for these photos.  Click on photos to enlarge. 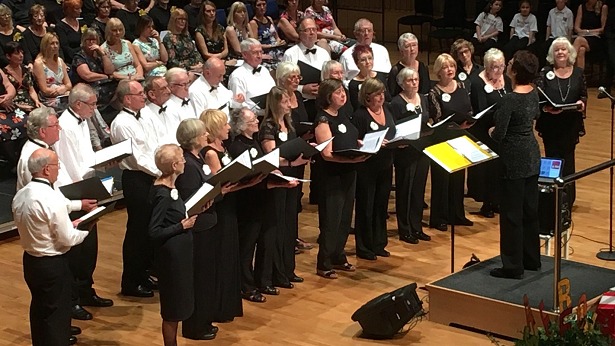 On 15th October 2017 Saffron Harmony Choir joined WI and Community Choirs from Essex and Cambridgeshire in a Gala Charity Concert.

The total proceeds from the Choirs’ Festival at Saffron Hall was £4,722.  This amount has been sent to the charity Associated County Women of the World, a charity that supports women and their communities worldwide.

Philippa Croft and members of the WI in and around Saffron Walden arranged the day. The Concert was hosted by Tim Lihoreau Creative Director and Presenter of Classic FM ‘More Music at Breakfast’

The concert was a complete sell out.

Many thanks to Philippa for all the time she and her helpers spent making this day a very enjoyable and successful one.

Well what a good evening it was. The choir sang well. Isobel was brilliant the ukulele group was much appreciated some good poems and a lovely smiley audience.
And to top it all we will be able to present Accuro and the East Anglian Air Ambulance with £540 each.
A big thank you, to everybody that helped and supported us.
Joan Shadbolt

Click here or on the above photo to see more