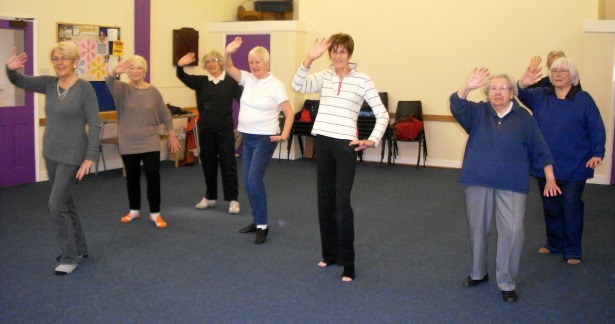 Above photo by Angela Rowland

“Tai Chi combines deep breathing and relaxation with slow and gentle movements. Originally developed as a martial art in 13th-century China, Tai Chi is today practised around the world as a health-promoting exercise.
Studies have shown that Tai Chi can help people aged 65 and over to reduce stress, improve balance and general mobility, and increase muscle strength in the legs. Some research suggests Tai Chi can reduce the risk of falls among older adults who are at increased risk.
Tai Chi is commonly performed as a low-impact form of exercise, which means it won’t put much pressure on your bones and joints and most people should be able to do it. It is ideal for inactive older people wanting to raise their activity levels gently and gradually.
Source: www.nhs.uk/Livewell/fitness/Pages/taichi.aspx ”

At the moment we have two Tai Chi groups:

We have members of varying abilities and no experience is needed for beginners to join Group 2 which is at 11 am. Members can then move on to Group 1 when they are more advanced.

The price per term varies according to the number of members we have and is calculated to cover the cost of hiring the hall and the tutor’s fee.

The Tai Chi Summer Term begins on April 20th and runs through toJuly 20th. No classes on June 1st due to Half Term

We meet on Wednesdays mornings in the Baptist Church Hall from 9.30 to 10.30am.

We meet on Wednesdays mornings in the Baptist Church Hall from 11.00 am to 12.00 noon